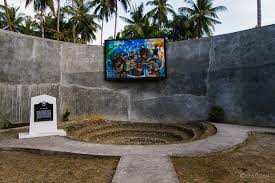 The National Historical Institute Marker of Sandugo. The proof that it was in Loay, Bohol were the Blood Compact or Sandugo happened last March 25, 1565 as evidences found and fit to the description written in the book (Colleccion De Documentos De Ultramar),it was in this book that General Legazpi’s expedetion was written and recorded. The Deep Well between two rivers. It was named as Sikatuna’s Well built around 1200 A.D. and until now is still existing and can be seen at Hinawanan Loay, Bohol. In this well the men of General Legazpi  fetched water from and bought in their galleon.

To get there you can go to Dao Integrated bus terminal, by jeep, by SouthernStar bus or by your own car. Blood Compact Site lies about 18.42 kilometers to the east of the City of Tagbilaran.